Anyone know what movie that's from???  lol  One of my favorites!

I have a little bit to catch up on. We've had 2 birthdays, Independence Day, Twilight Camp, Girls' Camp, new Jessica Sprague classes, and I'm trying to get my photography business set up. So not a whole lot of downtime for us! I guess I should say 3 birthdays but mine stopped counting a year or two ago. ;)

This is birthday boy number 1! (yikes! He's looking a little shaggy...didn't realize it was that bad!) 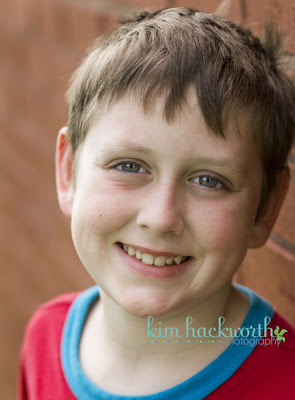 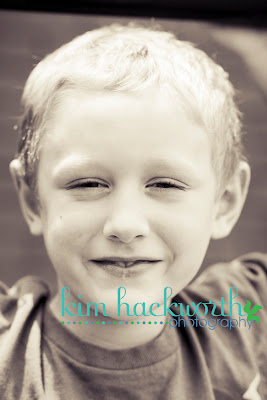 One of these days we'll have their birthday party!  We had a quick surprise party for Caden on his birthday...kind of a very last minute as in called some friends a few hours before party. It was fun though once Caden got used to the idea. He actually kind of freaked out since he wasn't expecting it. And Brannon had taken him on a walk to get a snow cone to get him out of the house while everyone else was showing up. He got hot so eating all of that sugar made him sick. When he saw everyone, it was just too much for him to handle and took him about an hour for him to adjust.  Soooo...no surprise parties for him in the future!

Colton's birthday was during Twilight Camp so we couldn't do anything like that for him. He did remind us that we owed him a snow cone for his birthday so Brannon had to take him. lol  He gets to be baptized too as soon as we can find a date that works for everyone involved (including scheduling the building...that's getting to be a pain). We'll get there!  At this rate it may be August!! uggghhh...

For the 4th of July I did get to get out and get some fireworks pictures. They aren't the best but they are sooo much better than ones I've done in the past!  I wish we had been closer so I could have used my better lens (85mm with infinity focus) but my 75-300mm did ok. 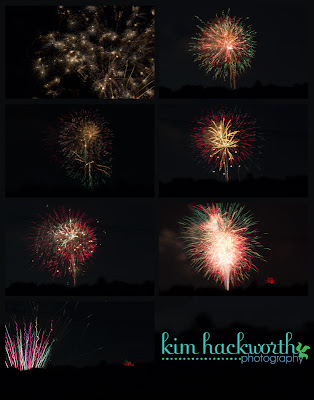 Nighttime photography is soooo not my forte!  It's still fun to play with though. :)

And now on to new classes!  Brushabilities version 2 started today. If you've ever wondered how the brush tool works in Photoshop/Elements, this is the class for you! It is such a fun and functional little tool. You can use it as a rubber stamp or use it to correct photos (color corrections, pimple remover, whatever!). You can use it to draw patterns too. Here's a layout that is from Lesson 1... 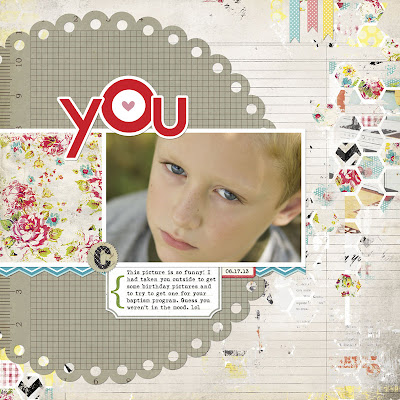 See the heart inside of the "O"??  Yep, that's a brush (used as a rubber stamp). So is the bracket and lines on the journaling card. (Colton looks a little vicious!!) And this is just the beginning...Jessica starts simple and ends advanced. You can read more about it on Jessica's blog.

Also this month, I've been working on trying to set up my photography business. I'm just in the beginning stages of this right now but I hope to be up and running soon. The business side is killing me!  I just want to take pictures...the fun part. Actually the business part won't be so bad once I get everything set up the way I want it but it's the setting up part I don't like. I did manage to get my logo designed (see the photos up above). That's one thing out of the way anyway!!  I'm also trying to decide if I want to just use this blog for my biz too or if I want to start one that's just photography.  It's hard enough to keep up with this one so for now especially, I'll use it for both.

Oh...and I haven't been totally non-crafty this month either!  I made this on July 4th... 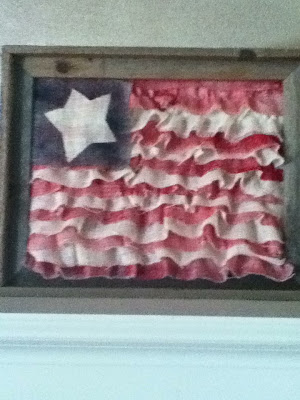 Sorry for the bad photo...I took it with my iPod which isn't the best quality but it was handy. :)  I found the idea on Pinterest and bought the stuff a couple of months ago when I bought the stuff to make the flags for our Relief Society activity. Anyway, this is from Mama Says Sew.  It was super cute and pretty easy. I did get a hot glue gun burn on my finger that burned for days but it was worth it. ;) I think about the only thing I did different was to pull one of the burlap strings in each strip to gather it a little...I didn't sew a gathering stitch but just pulled one of the strings in the material.  You'll have to be careful if you do this!  Only pull it until you get to the middle and then follow it to the other end and pull it from that end...to keep from pulling the string completely out which would totally defeat your purpose. ;)  I found the burlap at Hobby Lobby for $3.99/yd and got the frame there too. It was 1/2 price!  I didn't get one as big as the one she did but went a size down. It was a fun little project!

These are the wooden flags we did in Relief Society in May... 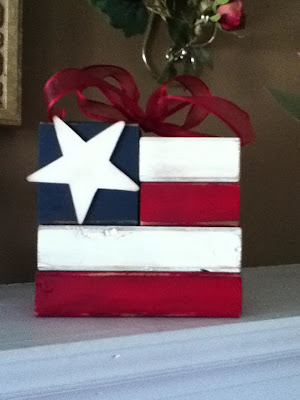 Once again and iPod picture. We found this idea off of Pinterest too. It was from Six Sisters' Stuff. You can get on their blog and trace it back with everyone's links to where the idea originated.  It's kind of interesting to see everyone's take on it. It's hard to see in this picture but the only sanding I did for the blocks was only enough to get rid of splinters. Then I painted them and sanded the edges again to give them that worn look.  I used walnut ink (Ranger's Distress Ink pad) and a sponge and rubbed the blocks with it...especially where I sanded it. I also painted over the stars (which came in yellow) and rubbed the ink on it too. The ribbon is some wired ribbon I found at Michael's. I actually hot glued my blocks together but they came apart after having to move them to church and people handling them. I haven't bothered to reglue since the ribbon is holding them together pretty good.

Well, I think I'm caught up on everything or most everything anyway! I'll try not to write a book the next time. :)