Pinewood Derby, A Craft Project, and a New Addition

I'm starting off with a total brag moment!  See this little cutie here??? 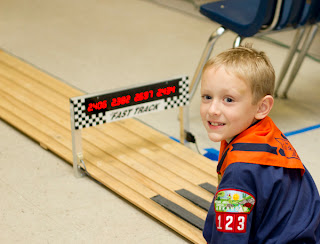 Well, he's my little Tiger Scout. This was his first year doing the Pinewood Derby as a Cub Scout (he placed 3rd last year in the sibling race :) ).  Of course, we waited until the week before to go to Dad's to cut the car out.  And then another couple of days later I got around to painting it.  And the night before, Brannon got the wheels on and I got the stickers on (yes, Colty helped).  He wanted the car shaped like the one on the box...we assumed he was going to do a race car or he actually might have mentioned that he was at some point. By the time it came around to decorating it though, he changed his mind.  This is what he raced... 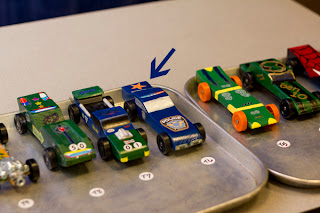 So yep...he wanted a hot rod police car!  Bet every beat cop in America is wishing for one like this!! :D

He left with this... 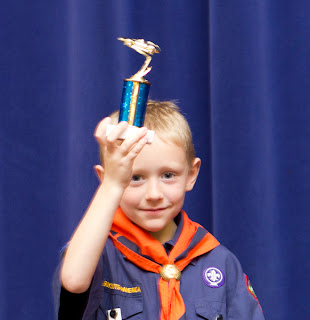 ....a 2nd place trophy for his group!  Now, we get to go to District in April.  And now the pressure is on to help Caden come up with a fast car, too.

I spent the better part of today working on a baby gift for a friend at church that is moving in a couple of weeks.  Really going to miss her and so is my daughter!  She's Ali's Young Women's President.  Heidi Swapp has a class on Jessica Sprague called For the Love full of hybrid projects.  I found one in there that I wanted to do for Cassie. 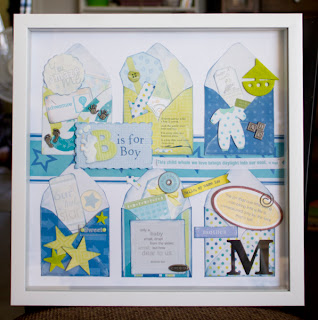 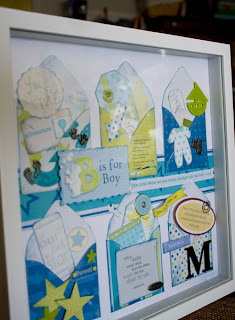 I took her envelopes framed in a shadow box and made if for a boy.  I have a lot of scrapbook stuff leftover from my baby days so had plenty to play with.  A few punches and ink and lots of glue later, this is what I had!  I really hope she likes it!!

And for my big surprise of the day!!!  THIS is what UPS left on my doorstep today!!!! 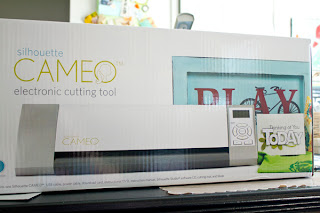 I've been playing with it a little.  We had to go buy Caden another pair of shoes today...we just bought him some new ones in January...not sure what that child did to them.  Anyway, that seriously cut (no pun intended) into my Cameo time.  I've got to play with it a little.  I may have to upgrade my software so I can use the Print and Cut feature on my designs.  Jessica is going to have a Silhouette class too that I'm going to take. So far I like it way more than I do my Cricut.  It comes with shapes I actually like and a $10 gift card that you can use in their online store to get more shapes...which are really cheap too.  AND as if that's not enough some of my favorite designers have shapes for sale there...Heidi Swapp (House of 3), Echo Park, Samantha Walker, and tons more! I really like the software with it too.  It's not like the Cricut's software where you have to have the actual cartridges the shapes you need are on...you can import them (unfortunately, not .svgs unless you upgrade) and trace them.  Still trying to figure this out.  Once I get the hang of it, I'll let you know what I think of it.

I have that same little cutie from the top of this post standing here wanting me to play with him...gotta go!!  :)