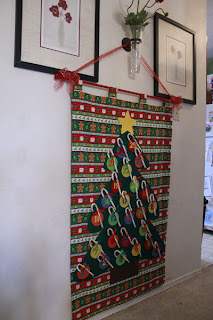 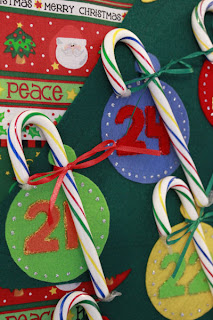 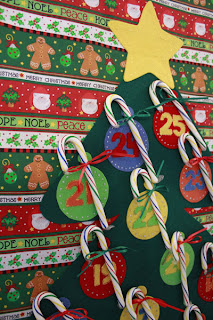 Remember that Halloween Advent calendar I made a few posts down?  Well, I couldn't let Christmas go without one too.  The pictures aren't too hot since I didn't really have a whole lot of room to work but you get the general idea.  I saw a picture of one in Pottery Barn Kids catalog...was looking over my friend Chrissy's shoulder as she was looking at it. :)  Anyway, I was inspired and made a trip to Wal-Mart.  The backing is just regular fabric that I doubled over and sewed.  I made loops instead of folding over the top.  The Christmas tree is made out of green felt.  I ironed wonder under on it (I'm totally in love with that stuff!!) and folded it in 1/2 and freehanded a tree and cut it out. I sewed around the edges and then ironed it on the fabric. I used a tag I found on one of my Cricut cartridges and cut it out of paper. I ironed wonder under on little sheets of felt and traced the tag pattern on the back and made ornaments out of them. The star was done the same way except I stitched around the star too. I also ironed 2 stars together to make it a little thicker. Before I ironed the ornaments on the tree, I placed a piece of ribbon under the top so I could tie candy canes on the ornaments later. I used a stencil to trace the numbers on the back of the felt...reverse them so they will be facing the right way when you turn them right side out. I finished up by decorating the ornaments with Stickles and tying on candy canes.  I hung it on a dowel I painted red and tied a wire-rimmed ribbon to hang it from the wall.  It turned out a lot bigger than I intended it too.  I did the tree part first and built the rest of it around it. Oh well...still really like how it turned out!

This is our Christmas tree.  The stinkin' cats think the ornaments are their own personal toys.  They are really annoying me! I used to put the tree by the front windows but this year I decided to change it up.  I conned Brandi into helping me move my living room around so now the tv is by the front windows and my tree is by the couch.  I think I like it this way.  It was a lot easier to decorate it since I didn't have 2 walls in my way. I still need to take pictures of my mantel but I'll do that later. I LOVE this time of year!! 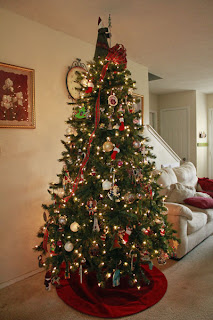 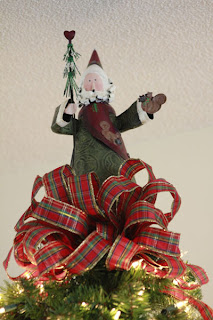 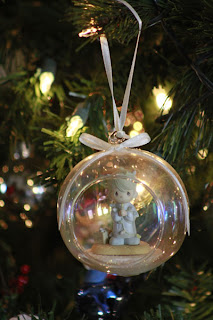 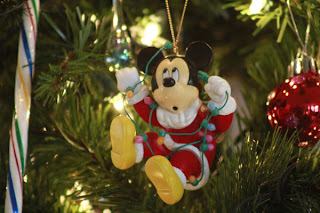