This has been one crazy month! First off, it was the beginning of school. Caden started Kindergarten, Ali 3rd grade and Colton preschool. I'll get pics a little later. Caden did a lot better than I thought he would do. He's been saying all summer that he didn't want to go to school so I really thought I'd have a problem on my hands. Brannon stayed home with Colton while I took the other two in. Caden remembered where he was supposed to go from when he had his orientation and he sat right down. Mrs. Testa had some playdough for the kids and they were working on that. I told him bye and that I'd pick him up after school. He didn't even look worried about it! I even got pics and a kiss out of it. Ali, of course, did fine settling in too. She met a new girl at orientation and she found her and sat by her.

Colton on the other hand wasn't as thrilled at first. He started this Monday. At the kids' school, there is a special education preschool that you have to qualify for. Caden did for two years for speech and fine motor and Colton qualifies for the same...he learned to talk listening to Caden so he needs help retraining. He was so excited about getting to go to school too. He cried Friday when we dropped the other two off because he wanted to stay too. Monday gets here and he puts on his backpack at 12:20...the bus isn't supposed to arrive until about 12:50-1:00. But he was ready! He gets on the bus, tells me bye and gives me a kiss. Then the bus never goes anywhere. Janet opens up the door and tells me that Colton won't get in his seat and asks if I can come help calm him down. He is holding on to the seat in front of him for dear life!! Guess he thought I was riding the bus too. Finally, we get him strapped into his car seat and off they go. I ended up calling about 20 minutes later to ask if he was doing all right. Judy (teacher) said that he called for me when he first walked in, cried for a couple of minutes, and then went to the table to work puzzles with the other kids. He's done just fine ever since. He loves going and it's not so bad since he's not expecting me to be there now. He really adjusted faster than I thought he would. Caden would always cry when he'd have to go but he was fine once he got there. Colton has always been the momma's boy and really hasn't been away from me that much. So he's been a big surprise for me this week.

Brannon took off Monday afternoon so he could see Colton go to school for the 1st time and go pick all of them up afterschool. He talked me into walking to the post office and then ending our walk by picking up the kids. It was HOT!!! We usually walk about 3 miles anyway so this normally wouldn't have been a problem. What killed me is that he underestimated the time and we had to book it back to school! I had a pinched nerve in my lower back that slowed us up when we first left and I had to work it out. I also ended up with what I thought at first was a blister but it never did pop up. So brainiac me decides to go for another walk on Tuesday morning after the kids were dropped off. I got back home and couldn't move! And that blister decided that it was going to pop up after all. Imagine Mt. Everest on the bottom of your foot and trying to walk on that! Needless to say, I didn't get any notions of walking yesterday...at least until that all heals up.

Remember me saying that I got a DT spot on Scrap That Moment??? Well, everything is fixing to re-open up!! The gallery is now open and ready for all of your layouts. Lynette still has some security patches and some fixes to do and then the forums will be open too. I'm really looking forward to everything. She's got some fun stuff lined up so I hope to see you over there!

I missed the Ali Edward's chat. I was asked to teach a scrapbooking class at church and by the time I got home it was too late. Kristen posted a recap of it here if you want to see what all she said. Serendipity also has a crop coming up in September so look for more info coming about that.

So now that my novel is done (speaking of novels...have you read the Twilight series yet???), I'll leave you with some layouts that I did for Serendipity for this month. 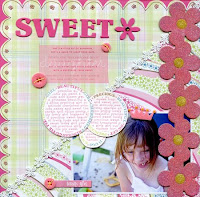 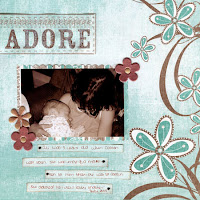 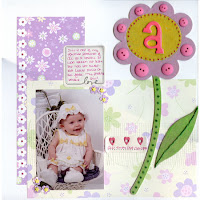 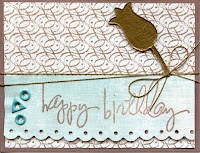 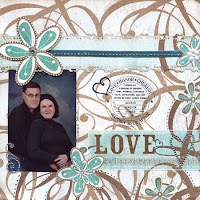 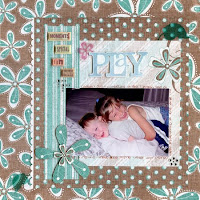