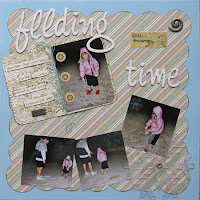 Lately, I've been trying to use older pictures in some of my layouts. I've got plenty to choose from and since my goal is to make 15 layouts a month, I might as well pull from the old ones too! These pictures are from Christmas 2004. Ali had received Reindeer Food from Santa when she went to visit him earlier in the month. For some odd reason, we actually got a bit of snow for Christmas Eve. She took her feed out and sprinkled it on the lawn. And, yep...that's Brannon wearing shorts and a jacket! Later after Ali went to bed, Brannon took a broomstick outside and made "reindeer tracks" all around her food. She was so excited that they actually ate at her house!!

I made this layout using Crop Addict's January kit and the January kit option add-on. I used my Cricut cartridge, Accents and Elements to cut the scallop around the patterned paper. I defined the edges by inking them with a marker. It's hard to see but in the lower right corner is an acrylic snowflake. I tried painting it with glitter spray but for some reason my can was going nuts and wouldn't stop spraying...had to throw it in the trash to keep from glittering up my whole room. It wasn't really spraying that much glitter anyway so I hurried and covered it with Stampin' Up! glitter while it was still wet. The photo mat was made by running it through an embossing folder in a Cuttlebug and then inking the top. I used chipboard letters and embossed them in white. I didn't cover the letters all that much and let some of the chipboard show through so it would look antique-y. I also used a Daisy D's rub-on runner around the edges of the blue cardstock. I'm not too thrilled with their rub-ons but I didn't have anything else to use. They are hard to get to stick down and they leave a huge ghost image if you use it on dark cardstock or other surfaces. Just fyi if you were planning on buying any.

what a great lo! love the title and the kit loosk yummy too!