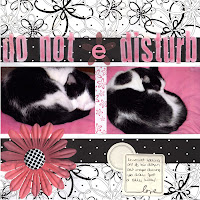 I did this layout last night of one of our cats, Emmitt (named after Emmitt Smith, of course!). The background is one sheet of patterned cardstock from Luxe Designs. The middle where the pictures are is just a black strip. The paper didn't need anything added to it so I just left it alone. I adhered the photos down and put a piece of Heidi Swapp tape along the seam in the middle. I ironed on some HS iron-on fuzzy letters for my title. That was a trip!! Not sure if I really liked that...ended up scorching one letter and a little bit of the paper. I need lots of practice for that one! I left a space between not and disturb and put a HS pink ghost flower with one of her chipboard letters for the flower center. The big flower is attached with glue dots and a puffy flower center was placed in the center (both HS also). The journaling spots are also Heidi Swapp. I chalked the fuzzy letters to try to hide the scorching with Pebbles shimmer chalk. The paper and the "e" both came from Crop Addict kits but I can't remember which ones.

I have a couple more layouts. You can view them here. Enjoy!

I know that every once in awhile everyone tells a little white lie. That's not what this post is about. This is about the really dishonest people. Yesterday, Brannon and I drove over 2 hours to go to a scrapbook store that carried a certain product I wanted and wasn't available here. This place was listed as a store on the manufacturer website. So, off we went! We end up pulling into a residential sub-division and the address was that of a home! I was soooo disappointed. We finally found a couple of other stores and I told the owner of the 2nd one what happened. Apparently, this lady is notorious for doing this kind of thing, even going so far as to take pictures of other stores to show as her own. The manufacturer of the product I wanted doesn't allow anyone but retailers to order from them, so she lied to be able to be listed on their website. According to the other store, I'm not the first one to have driven hours just to find a house instead. She's been turned in before (and was again yesterday!) and has even been kicked off other manufacturer web sites before...guess it doesn't matter to her. She'll just keep doing it until she gets everything she wants. I think it's sad for the honest business owners who are doing what they are supposed to and then they have someone around that cheats like that. Anyway, this has really been on my mind and wanted to share. Moral of the story...call before you jump in the car to go to a new store; you never know what you'll really find!